GRAB YOUR COPY ON ALL RETAILERS!

“Don’t you think for one second, Jerome, that I’m giving you any special treatment while I let you stay 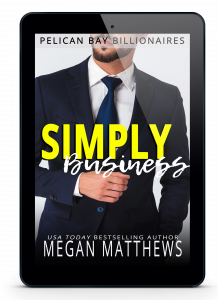 here,” Katy said, falling into her manager of the Pelican Bay bed-and-breakfast role with authority.

My cousin Pierce may have loved to argue with the blonde, but I hated how she treated everyone like we were children—at least if your last name was Kensington. Yet, my loyalty to Pierce stayed rock solid, and if he planned to keep Katy around, I’d have to figure out how to get along with the harpy.

I gave her a tight smile. “I wouldn’t dream of it.”

Her gaze fell to the overstuffed leather duffel bag I placed on the floor next to the check-in desk as I signed for my room. “There’s no bellhop, so you can carry that yourself.”

My smile tightened even further. “Right.”

I full-heartedly made the choice to settle down in Pelican Bay, but it would take time to get used to the laid-back atmosphere of the place. Who didn’t employ a freaking bellhop?

I scratched my signature on forms and slid them back across the tabletop to Katy.

“How long will you be staying with us?” she asked, sounding like a respectable employee for the first time since I walked past the double doors and into the lobby.

The shortest time possible. “Just until they finish the penthouse in my new building.”

Katy smiled, but she forced hers as much as I did mine. “Excuse me. What I meant to ask was, how long until they finish your monstrosity of a building?”

I barely held back the eye roll. Pierce warned me the town wouldn’t love my addition to the city, but I argued with him that no one would throw a tizzy over a mere ten-story building.

The people of Pelican Bay had strong feelings regarding their skyline. They didn’t want one.

“Soon. The team is finishing the penthouse first, so I can move in early.”

That hadn’t been the original plan, but now with Pierce requiring me to be the point man on the final stages of the project, I bumped it up the priority list. The sooner I got out of from underneath Katy’s watchful eye, the better.

“Good,” she said, passing me over a key and then walking to the other side of the desk and down the hallway. “Are you coming?” she asked when I didn’t move.

I hiked my bag over my shoulder and took a step toward her. “Yes.”

Except who knew what she led me toward? Probably my death more than a room. With Katy Kadish, anything lurked around the corners. Until recently, she hated the Kensington family, and I didn’t buy her reversal.

How Pierce fell asleep in bed next to her every night I’d never know. He’d always been too trusting, at least with her.

Katy stopped at a door on the side of the hallway and took the key from me to unlock it. “Remember, no special treatment.”

I laughed. If I was going to stay in Pelican Bay, I’d have to get used to their antics. Katy would never change and I’d chosen this place to escape. I definitely didn’t expect special treatment.

If I wanted to be away from the hustle and bustle of life in New York, I needed to accept the weird customs of this town. If Pierce spent every day of his life arguing with someone nonstop, that was his choice. It had to be exhausting, but he’d made his bed. Now I’d sit back and watch how it unfolded, but I wouldn’t fall into the same boat.

As for me, I wanted nothing more than to spend my nights alone in my penthouse, taking over the business world. I was done with fake friendships, charity events where no one remembered what they were for, and every other dreadful part of city life.

GRAB YOUR COPY ON ALL RETAILERS!