Pre Order COMFORT on all platforms and receive an extended epilogue on release day!

A cabinet door closed and Katy sighed forlorned. There was no helping her once she became disillusioned with the offerings in my home. I adjusted a couch cushion and leaned back, finding the remote shoved between two pillows.

Katy opened the fridge door with a heavy sigh—this one of annoyance. 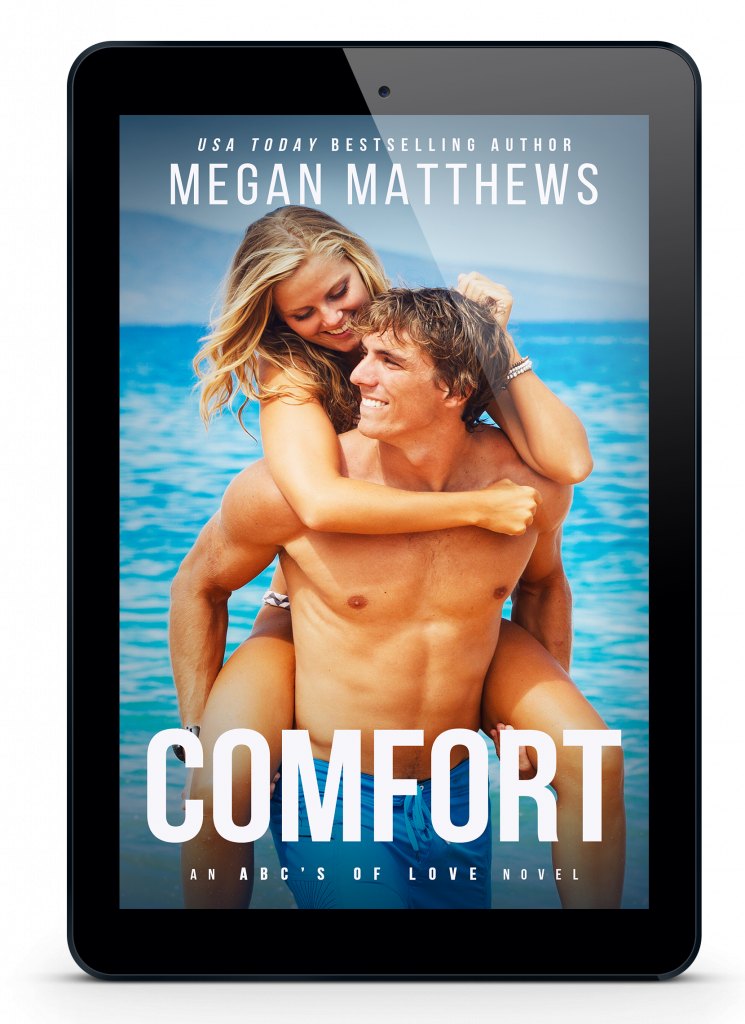 “Don’t you have food at the mansion where you live?” I called from my spot on the couch. No way was I leaving the comforts of my living room to help her satisfy a snack craving.

“It’s healthy stuff,” she said, leaning to the side and peeking at me from in front of the fridge. “And I don’t live there.”

I flipped on the television and quickly changed the channel so Katy didn’t see the last thing I watched. She’d never let me live past my obsession with Rachel Ray’s cooking show.

“Could have fooled me,” I mumbled while using the guide to find a manly program, maybe something with cars or knives or a World War II documentary.

She leaned into the space between my kitchen and living room. “Do you want me to leave?” Katy’s bottom lip stuck out in her signature pout. It was the one move she still had on me after our years of friendship.

That and she normally brought me cookies from the bakery.

“No. I don’t care if you hang here. I just don’t want Scrooge McDuck to come after me.” Pierce spent months practically pissing all over Katy. No way did I want to step into that puddle.

Katy snorted. “He knows you’re my bff.” She slammed the fridge, causing the glass condiment jars in the door to rattle.

I cringed. Just like when we were kids, she’d be here to make the mess but never stick around to clean up the aftermath. She walked into the living room carrying my brand-new jar of nacho cheese and an unopened bag of blue corn chips. I’d been saving them for poker night with my brothers.

“We won’t be best buddies forever if you keep stealing my snacks.”

Katy dropped to the couch and handed me the nacho cheese to open. Like a dope I did. “Dude, my other friends are women.”

She leaned over, putting herself between me and the television. Her expression calling me a moron. “They don’t keep buckets of nacho cheese in their refrigerators.”

Sucked to be them. The poor men who lived with Katy’s friends had to be starving. Ridge’s group weren’t ones to kiss and tell, but they definitely weren’t mentioning the lack of nacho cheese in the weight room during our weekly workouts.

I propped to my side to see the TV again and waited for Katy to resume her position. “How are you doing with losing your grandma?”

It’d been almost a year since Katy’s grandma died, and she’d begun talking about her again. Well, without choking up when she did.

She grabbed her phone. Classic Katy deflection move. “Okay, actually. I miss her obviously, but Pierce brought flowers to her grave site with me on Memorial Day. I think Nana liked that.”

Katy seriously didn’t remember how much her grandmother hated the Kensington family. She had Pierce totally whipped.

“He wants me to move in and rent my place to someone new, but I’m not ready.”

That was news. “Not ready to live with Pierce or to say goodbye to the house?”

Katy was more of an easy-going girl, so the fact she even mentioned Pierce’s wishes meant she was considering them more than she’d admit.

“The house mostly. I need a bachelorette pad so I can throw mad parties.” And there came the typical Katy.

The only people throwing mad parties in Pelican Bay were the high school kids who thought we were too stupid to know which corn field they’d set up their bonfires in, and occasionally we were fairly sure Pearl threw a rager. I only hoped they weren’t swinging parties with the older Pelican Bay population.

In the background, a fire roared high on the television, and Katy’s mouth dropped open, but not at the wicked knives they were forging on the screen. “What?”

“Holy shit, Riley,” she said, not taking her eyes from her phone.

If she showed me a kitten video, I’d suffocate her with a pillow. “What?”

The second holy shit had my curiosity soaring. Katy didn’t say holy shit twice in a row without reason. Normally.

She hit me on the arm twice and then once again harder. “Holy cow crap.”

“Katy!” I yelled in her face, trying to get her attention while grabbing for her phone.

She held it out of my reach. “Cassandra is back in Pelican Bay.”

“What?” She’d only talk to me about one Cassandra, and that didn’t make any sense. But it didn’t stop my heart from skipping a beat. If Katy was fucking with me, I really would stuff a pillow in her face.

She helped pick them out, so it was only fitting she die by them. “How do you know?”

Her finger ran the length of her phone. “Facebook group. She’s been spotted downtown. Pearl said they’re going in for pictures.”

I successfully ripped the phone from her hands. Katy tackled me on the couch, but not before I glimpsed a photo right as it posted. Cassandra’s long red hair hung past her shoulders, and even though I couldn’t see them in the shot, I had to believe the line of freckles still dotted her nose.

Then the name of the group where Katy learned this information caught my attention right before she wrestled the phone away from me by placing her knee precariously close to my junk. “Watch it. I might need those one day.”

“Ewww,” she said, crawling back to her side of the couch.

“Is that a Facebook group for gossip?” Only in Pelican Bay did they chat about residents online with live updates and photos.

“Pretend you didn’t see that.”

Easier said than done. The women of this town keeping tabs on us and posting it online—with pictures—would haunt my nightmares for years.

But I had bigger problems. Like why was Cassandra Cable back in town now? Her brother and his long-term girlfriend just eloped, so she wasn’t here to see him. Her parents always visited her in Tennessee. Why return after all these years?

“We should go find her,” Katy said, slipping her phone underneath her leg. Her eyes were as wide as dinner plates. The kind for full meals, not a salad or dessert. It meant trouble.

Cassandra was the only girl who had ever successfully broken my heart, and I wasn’t ready to run out and see her again. What would we even talk about? How she left me at the bus station after promising to run away from town with me? Or how my Aunt Mary told her she looked like a whore in her prom dress our senior year?

The history between us wasn’t what you’d call great.

At eighteen, I wanted to give up everything for a chance to start a life with Cassandra, but she just wanted to start a new life.

She’d gotten on a bus alright but not with me.

Why come back now after she’d avoided the place for so long?

“Why do you think she’s back?” Katy mimicked my question and grabbed her phone again, scrolling for updates.

I itched to pluck the device from her fingers again and see if there were any new pictures, but Katy would read those moves in an instant. “Who cares?” She could come and go, and it didn’t bother me one bit.

“Maybe she’s in trouble,” Katy said, her smile and eyes growing wider as she stared at her phone.

I sat up straighter beside her. “Is she?” What was Katy hiding?

“Katy.” My voice rose again. If she heard something and didn’t tell me, I’d make her pay.

She tipped her head to the side, as if the images on the screen needed to be viewed from multiple directions. I lunged for her, grabbing at the phone, but she saw me coming and moved in time, so I missed.

Unfortunately, her spastic movements caused a glob of cheese to fall on the leather sofa. “Katy, don’t fuck with me.” If Cassandra came back because she was in trouble, I had the people to help her.

Help her and then put her right back on a bus out of town to her happy new life. Rumors circled about her for years, but I knew the truth with Cassandra Cable.

Katy sighed. “No, she’s probably not in trouble.”

“How do you know?” Did she see her in town? Had she talked to someone? Did she have an inside line?

One of her shoulders rose. “She walked into the antique shop and no one had a gun on her.”

I settled back onto my side of the couch. “Okay, good.”

That meant I never needed to see Cassandra during her visit to Pelican Bay. I’d stay far away from downtown and her family members’ homes until I confirmed she’d gone back to her side of the country.

“What happened between you two?” Katy asked, turning and shutting off her phone. “Besides your Aunt Mary.”

I ran my hand through my brown hair, which was the same shade as my brothers. The Jefferson men all had matching looks. That was the only thing we agreed on.

“Nothing.” Katy hadn’t gotten the story out of me in the years since high school graduation and she wouldn’t pull it from me now. I’d guarded the secrets and hurt for so long I barely remembered the true story any longer.

It didn’t matter how our relationship broke. It only mattered how Cassandra destroyed my heart.

Pre Order COMFORT on all platforms and receive an extended epilogue on release day!