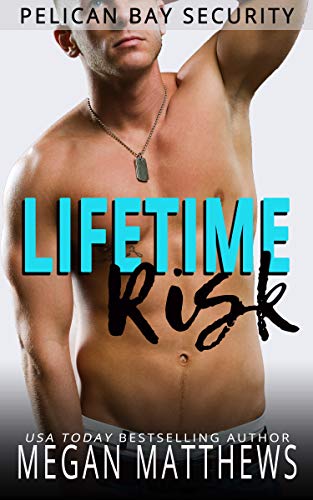 Read below for a quick look into the first meeting between Josie and Nate and then pick up a copy of LIFETIME RISK and finish the rest of their story.

The gorgeous woman hits my vision again as I turn into the next aisle to grab my favorite breakfast cereal. She stands with one hand on her cart and the other reaching forward as if to grab a box of Lucky Charms before her hand pulls back in indecision. It’s the third time I’ve seen her during this grocery trip, and for reasons unknown, we continue to be launched into one another’s realms.

It could be fate.

Or it’s a very real possibility this grocery store is entirely too small and we’re both traversing the aisles in the same order.

Her beauty leads me to believe its fate. Her inability to notice me as I’ve noticed her leaves a few unanswered questions. Married? Boyfriend? Not into tall, muscular men with five o’clock stubble? Obviously not the case.

The woman’s eyes narrow again and she tucks strands of her hair that have fallen in front of her face behind her shoulder. I’ve never described a woman as cute before, but it’s the word that comes to mind as I stare at her like a creeper. This mystery woman is someone I’d take home to meet my parents—a woman who would take care of me.

Not that I would admit I needed a woman to take care of me, but returning to the states after giving up what I had thought would be a military career left me wanting more out of life. Sure, pizza, beer, and video game night with the other former SEALs Ridge signed onto his team quickly become some of my favorite pastimes, but it wouldn’t be enough forever.

With my eye on the cereal, I push my cart next to hers and get up in her space, looking for a reason to make conversation. There’s obviously something on her mind. If not, she puts way too much consideration into cereal choices. My arm brushes up against hers and I catch the faint smell of lilacs in the air surrounding the space we now share.

Finally, with a shake of her head and a small growl that does embarrassing things to my groin in this public building, she snatches the box of Lucky Charms off the shelf before tossing them in her cart and leaving.

She didn’t even notice the six-foot-three man taking up the space next to her.

I’d been so busy working at Pelican Bay Security hunting down whoever is using our small city as a traffic highway to run drugs and guns into Canada that I hadn’t had much free time. Besides my weekly video game night, my life consisted of work. There also hadn’t been time for a woman. My mind never even entertained the possibility of dating until I spotted this beauty at the beginning of my grocery trip.

This particular woman called to me. I wanted to find out her name, where she came from and what she did in her free time. I needed to ask why she agonized over the choice to buy Lucky Charms.

How in the world had I gone unnoticed? It’s not that I thought too highly of myself, but I looked in the mirror every morning. I’d been asked out more than once while attending a team meeting at the town’s bakery. I had a certain appeal to women, but this one hadn’t acknowledged my presence even as my arm brushed up against hers.

Had I lost my touch?

No longer interested in the cereal choices, I grabbed the same brand I always did and threw it in my cart, lost in my own thoughts of failure. Maybe I needed a new tactic? The problem was we were running out of grocery store. Finding the mysterious woman again would take time once we left the store, especially since the only thing I knew about her included her indecision over buying Lucky Charms.

Time was running out, and if fate wanted us to be together, I would have to be more proactive if I saw her again. At the end of the cereal aisle I made a right, bypassing an end cap of my favorite soup and turning down the second to last aisle in the store. I’d grab a box of crackers for Crispin and then see if I could find my nameless beauty.

Except when I look up, she stands once again in the middle of an aisle, her eyes in a daze as she stares profoundly at the multitude of cookie choices lining the shelves. I stall at the end of the row, trying to figure out what thoughts caused her to look so perplexed at the cookies.

I knew relocating to this part of Maine meant I wouldn’t have the same luxuries and conveniences I’d had in Portland. At the time, it sounded like an acceptable compromise. I hadn’t accounted for the true horror of what I’d be facing in the limited grocery store. This store—the biggest one in the county—only stocked six different kinds of Oreos. It shouldn’t take so long to make a decision, but as all six of them stared back at me from the grocery store shelves, I found myself pondering the deliciousness factor of each one.

Normally I was a regular Oreo girl. Why divert from the original when it was so delicious? But I was facing another weekend home… alone. I dropped Emma off at her father’s home—the one we used to live in together before I caught him cheating with our nanny—and then realized on the drive back I didn’t have anything sugary to get me through until Sunday.

My ex, Barry, only saw Emma about once a month, but it felt like she was gone a year during his visitations. I supposed if I had any social life it would be easier, but being a single working mother and moving into a new town had crushed most of my desire to party.

I spent my weekends alone binging Netflix, the HGTV channel, and eating more Oreos than I would ever admit to anyone—even if a judge put me under oath. There were a few things a woman should never tell, and Oreo consumption during a forty-eight-hour weekend was top of the list.

When facing this much time alone, I didn’t like sticking to my safe choices. I wanted a little adventure. Emma and I had finally started to settle into a routine, and the last few days left me feeling as if we had change coming right around the corner. I didn’t know how or when or even what to expect, but life seemed different. Like the air had an extra shimmer to it, or something similarly ridiculous.

You couldn’t eat plain Oreos when the air had an extra shimmer to it. Shimmery air called for special Oreos. The problem was, the small grocery store lacked options.

They had Double Stuff, but honestly my favorite part of the Oreo wasn’t the creamy middle, but the outside cookies. Sometimes I didn’t even eat the middle part, preferring just to dunk the cookie pieces in a glass of milk. Double Stuff would be a waste.

Also on the shelves were those new Oreo Thins for a healthier option, but that was not on my agenda this weekend either. I didn’t even have a boyfriend to impress, so there was no point in hiding the fact I liked the good stuff.

Of course, there were extra flavors: mint, chocolate chip, and red velvet. The red cake-like concoctions called to me, but I pulled my hand back at the last second. I’d already put the box of Lucky Charms into the cart and had more sugar in it than I like to start my daughter off with in the morning. If I gave her sugar for breakfast, she’d run laps around our apartment for the entire day. But she loved Lucky charms, and it was hard to deny her the sugary treats.

Red Velvet Oreos used to be my favorites, but then I’d read all the negative scientific research about red dye number 40. Although, from what I recalled, it was mostly a concern for children and not so much adults. Plus, it was my weekend alone and if I was being honest with myself, these cookies wouldn’t make it to Monday, so I could toss out the evidence and no one would know.

My decision made, I gently lay the package of Oreos in the shopping cart seat where Emma usually sat.

After scratching the last item off the list, I fold the paper over and stuck it back in my pocket, done grocery shopping. I could skip the last aisle altogether. With my eyes set on the exit, I reach back to grab my cart at the same time the metal jiggles, the beast hitting me in the back of the foot directly on my Achilles’ heel.

“Ow,” I whispered mostly to myself. “So sorry.” I used my free hand to wave, not looking back to give the person who practically attacked me with a shopping cart another second of my day.

The offender utters a quick, “I’m sorry,” his voice deep and masculine. I itched to check it out for further face inspection, but a package of Oreos and HGTV reruns waiting for me at home. I had no time to stand around in the grocery store any longer when I could be a home, counting down the minutes until Emma returned.

Pick up your copy of LIFETIME RISK right now! It’s going to be a crazy ride. You do not want to miss it!